A Chronology Of Music And Musicians

Volume 1: From Prehistory To The Seventeenth Century 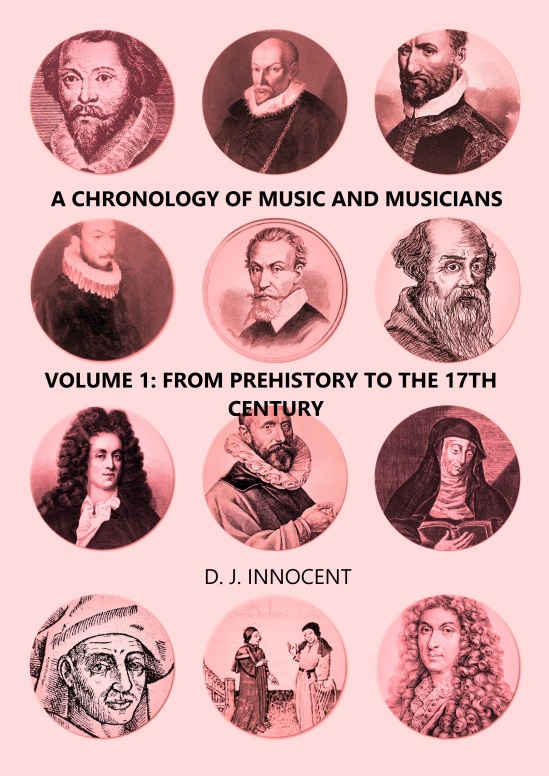 A chronology of music from prehistory to the present day

This is a timeline of major musical events, works, composers and artists colour coded for ease of use (see below for key).

Once completed it will cover a vast array of music and music makers including classical, jazz, rock, electronica, blues, folk and country. The emphasis will be on artistic importance rather than commercial success. This is a distinction that is inevitably subjective, but as I see it there are three grounds for inclusion – artistic merit, historical significance and cultural influence. Thus areas such as contemporary classical, jazz and the avant-garde are given more weight than their commercial clout would allow, but at the same time, significant mainstream pop acts are not ignored. I’m aware that the coverage of music from outside of Europe and the Americas is inadequate, something I intend to address in the future.

Generally speaking, the site is probably more than 98% complete now. Everything up to the end of 2004 is more or less finished.  There are currently more than 60,000 individual entries.

If you spot any errors or serious omissions, please let me know.

Dates are in European d/m/y format.

These have been tricky to pin down with any real accuracy, so they are listed by month rather than precise date of issue. It also looks tidier to have records listed separately on a month by month basis. Important recording sessions are given their own entries, and where known (or relevant) the recording dates are given for most releases. Where there is no country listed after the record company name, then this refers to a US release. As a rule of thumb, where there are multiple record companies involved I’ve used the artists’ country of origin to determine which issue to use, but there are exceptions where an act is primarily associated with an overseas record company, especially when it comes to acts whose home countries have relatively undeveloped recording industries.